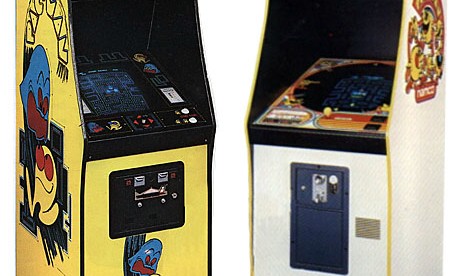 I thought I’d do a series of posts that would keep me updating my page and get me writing regularly. So, I’m gonna do  weekly  posts about my favorite games to play on MAME. I’m starting it all off with Pac-Man

In 1980 Namco/Midway released Pac-man in the US market. In Japan it was known as Puck-man but since the word Puck was easily vandalized to read the word fuck, it was decided that a name change was in order. This is a classic maze game and the controls couldn’t be more simple. One nubby, balltop, 4 way joystick….and…. nothing else. Other than the joystick, the control panel has 2 buttons, for selecting one or two player. The basic gameplay has you playing as Pac-man and you are suppose to eat the dots that populate the maze.  You are chased by 4 enemies in the form of ghosts, with the names  Blinky Pinky Inky and Clyde,  who roam the maze. If they touch Pac-man he will wither and die. In the 4 corners of the maze you will find the 4 “energizer” power pellets. They power you up for a limited time and allow you to eat the ghosts. So its eat and run- energize and eat ghosts. To change things up a bit, there is also random fruit that will pop up under the “ghost” pen in the center of the maze. 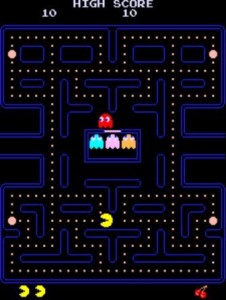 This is one of those games that define the saying “Simple to play, difficult to master”.  After you finish a level you are presented with a newer level. Each succeeding Level the ghosts and gameplay get a little faster. After you complete a certain number  of levels you are treated to a cut scene, a comic interlude starring Pac-man and the Ghosts. It is the first game to have include cutscenes. The powerup feature of the Energizer pellet is also a first for video games. Also the Designer gave each ghost a “personality” each one acted a little different on how it went after Pac-man. These little additions were done to keep the game from becoming monotonous, with level after level endlessly repeating. In actuality, due to a programming glitch, the game only has 255 playable levels. After 255, it displays a kill screen, half a maze and the rest corrupted. This makes finishing the level impossible and unplayable and your game ends there.

I play Pac-man and its sequel Ms. Pac-man a lot because its easy to just jump into and play. I can knock out 3 or 4 games and not have to think about it too much. The biggest difficulty on playing his game in a MAME style cabinet comes from the 4 way joystick. Most people who build a MAME  Cab or Control panel build it using an 8 way joysticks. Joysticks that have diagonals which combine the 2 adjacent switches to the diagonal direction to add 4 more directions to the standard up, down, left, and right. On the original cabinet  the joysticks are designed in such a way that going diagonal will not result in the double presses.

Its not impossible to play Pac-man on an 8 way stick. Its just you need to be a little more aware while controlling Pac-man.  To an elite player it is maddening to play on an 8 way .. but for the rest of us, we will seldom hang up while playing with a non 4 way.

This game was ported to a Large number of home consoles and computers. The worst version I’ve sen was the one on the Atari 2600. It was truely miserable and barely resembled the arcade Pac-man. The version on the Atari 5200 though, looked like the Arcade perfect.

If you have never played Pac-man.. welcome to earth. Sorry .. but its just 0ne of those games that you just had to have played at least one in your life. So this is the end of my first Quickie Friday review. I wonder what I’ll review next Friday?? See ya.