I started to review  the game Joust.. and I just wasn’t feeling it. I love Joust, don’t get me wrong, just wasn’t feeling it today. So I put it back up on the shelf for another day. While trying to figure out a game to review, I was listening to podcasts this weekend and watching random videos on the You tube. Someone mentioned a game that flooded me with a ton of good memories, and I was like yeah…..THAT. So here is Mat Mania.

So, I grew up in Hollywood in the early 80’s, and by Hollywood I mean I lived at Santa Monica and Vine(yeah THAT Vine), and my Mom had a small shop a block North of Hollywood and Vine. This was the early to mid 80’s and Hollywood Blvd had stopped being the Glitzy, Glamorous place seen on  TV. It was filled with Street kids, the homeless, and hookers. In all the years I lived there, growing up a “latch key” kid, I never got into trouble or got involved with drugs or gangs. I was a nerdy kid who basically  lived in the Hollywood branch of the library,  watched movies in Classic Theaters,  and played arcade games up and down Hollywood Blvd.

I can still  remember where all the games I played were found on Hollywood Blvd.  At a pizza shop at the corner of  Hollywood and Vine there was a 10 Yard Fight and 1942.  At the Ice cream shop, near the Fox Theatre, (first time I ever saw a waffle cone) they had a Galaga and a Millipede. Finally, at Star Burgers a few storefronts down,  there was a Karate Champ and , you guessed it, Mat Mania.  This single game took more quarters than anything else I played up and down the boulevard. 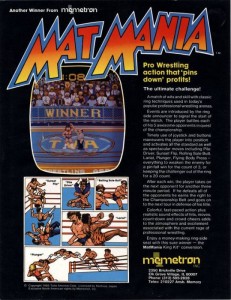 Mat Mania is a wrestling game, duh. In 1983, the technology of  video games had matured to a point where a decent wresting game could finally  be made. The only previous attempt I remember was Tag-Team Wrestling from DataEast, and man was it bad. The biggest sin a game can ever commit is not being fun, and Tag-team wrestling was a true sinner.  All the moves were menu based. You heard it correctly, a freaking menu would pop up when the  2 wrestlers began to grapple, and you had to choose your “move”. Sounds like a blast huh? So back to why Mat Mania was awesome. 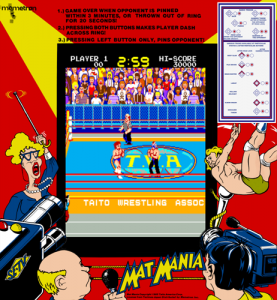 Mat Mania can be described as being something between a parody and an homage to the kind of wrestling shown on TV during the 70’s and early 80’s. They mimic a TV broadcast and the characters are all amalgamations of similar wrestlers that really existed. Coco Savage reminded me of Bobo Brazil, Kamala and Jimmy Snuka. The Insane Warrior reminded me of a Road Warriors, L.O.D. kind of character. The Piranha was a clone of the Great Mil Mascaras, of Mexican Wrestling fame and other Classic “Luchadors”. Karate Fighter was a Great Kabuki/ Ricky Steamboat Karate Style Wrestler. Finally there was the Golden Hulk, an obvious amalgam of Hulk Hogan, Jesse the Body Ventura and Superstar Billy Graham. There  was a nice broad spectrum of opponents, and each had their own play style that you had to work around. 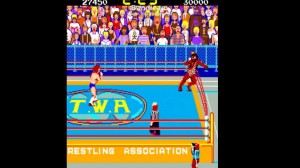 Mat Mania begins with an intro screen where the announcer calls the first match. You play a member of  of the T.W.A, the Taito Wrestling Alliance . Taito being the game’s publisher.  You have a pseudo 3D perspective of the ring, which allows you to move to all corners of the ring. You can also climb the ring posts and fight outside of the ring.  Your 2 basic strikes were the punch and kick, and depending on what you were doing and where you were in the ring, a decent host of moves were available.  You start off using the punch and kick to soften the opponent up. Once he becomes “groggy” you can engage him in a grapple hold (collar and elbow tie up in Wrestling lingo). Once in a grapple you could use a punch or kick to knock him off his feet or you could perform a body slam or, if your opponent is weak, a pile driver. If he was groggy you could also place the opponent into a headlock, and from there perform another set of moves.  There were also various moves that could be performed when throwing the opponent against the ropes. For a early wrestling game it has a lot of depth in the kinds of moves you could do. 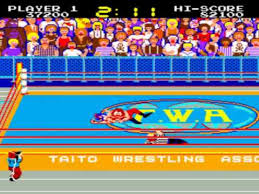 The 80’s were the height of Pro Wrestling’s popularity and until the WWF  had their Arcade licensed games, Mat Mania was as good as Arcade wrestling got. Even now I’ll fire up my Mame cab for a nice session of Mat Mania. With its light hardware requirements and easy 2 button control layout, its an easy  game to play on an emulator. If you take a little time and learn the control scheme, you will find this game to be a true pile driver of a game…;) <—- See what I did there.