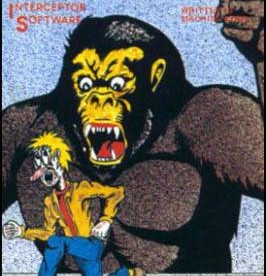 It’s my second Friday and here is my new MAME Quickie Review!!

CRAZY KONG, the bastard brother to the classic game Donkey Kong. Released by Falcon “outside” the US per its License in 1981. Crazy Kong had gameplay that was based off of the original Donkey Kong code, but included some changes to gameplay, color palette and  most of the sound effects. The grey area with Crazy Kong was, even though it was a licensed product and not a bootleg or a hack, when it was seen and played within the US, the license didn’t apply. So it was technically a bootleg because of a regional technicality. The reason Crazy Kong was even available in the US was because Donkey Kong Blew up. It was the hottest game of the year. Nintendo had a huge issues with fulfilling demand for DK machines from 1981-1982 which made Crazy Kong an attractive alternative to waiting. Crazy Kong (parts I and II), ran on modified Crazy Climber hardware. In addition, there are other versions of the game that also run on  Scramble, Jeutel, Orca, and Alca hardware. The upshot of running on different hardware, was conversions could exist for  games an operator might have, and aren’t money makers anymore. The other issue with Donkey Kong was that to have DK you had to purchase the whole cabinet. They didn’t offer any conversion kits for Donkey Kong .

My mother and I had just moved from Columbus Ohio to Southern California right around 1980. We moved around a bit and finally settled in Whittier California by 1981. That year my  Mom purchased  a small dry cleaner/Tailoring shop in beautiful Long Beach California. I would spend a lot of my summer days just hanging out in my mom’s shop. In the mini mall where my mom’s shop was located, I had two places to play games. One was the little Italian Sub shop(a real Sub shop), and the other was a Liquor store on the far corner of the mall. Every few hours I would ask my mom for a for some cash for  lunch or a quarter or two to go play some games. The Sub shop had Qix (pronounced Kicks) and the Liquor store had Crazy Kong. I had never played Donkey Kong before Crazy Kong, so to me this was the definitive game.  By the time I finally played a real DK cabinet, I was underwhelmed and didn’t like playing it as much as Crazy Kong. I felt more comfortable playing with the larger Wico balltop joystick of the Crazy Kong machine over the short stubby Nintendo 4 way stick. I even liked the sounds and Music of Crazy Kong better. The actual sound  effects were recycled from the Game Crazy Climber, on which the main hardware boards were also based on. So when Classic gamers wax nostalgic about DK, my mind flashes back to the many hrs of Crazy Kong I played instead.

I recently found out that there were multiple versions of Crazy Kong, the main two were aptly named  Crazy Kong 1 and 2. Among the biggest differences between the two versions were, Crazy Kong 1 didn’t have an attract screen and colors were much different from those of Donkey Kong, in 2, there is a mini story that plays on the attract screen and the color palette is more in the style of DK.   It seems the changes were made so that Crazy Kong 2 would look more like DK when it was played. If you have access to a MAME  cabinet or run mame on your PC, don’t overlook Crazy Kong because it seems to be a bootleg or knock off. Give it a shot and you will find a really fun game with its own twist on DK.