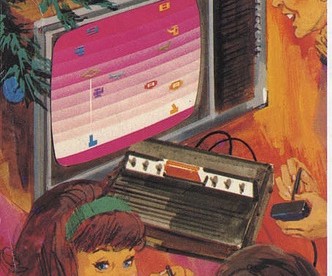 So Hi, I’m James and I’m a middle aged gamer. I have to say being born in 1972 allowed me to be old enough to be a part of the dawn of video gaming. My earliest recollections are only partially remembered memories. My grandmother had what I considered a Magical Closet in her guest room. The door would open and I could find Board games and toys  for me to play with. I don’t remember her buying any of those things, and none of them seemed old enough to have belonged to my father, my uncle or aunt. One blurry memory was of a wood grained console of  an unknown vintage, though the fact that it was the 70’s, it couldn’t have been that old.

The console was in a box and I drug it out of the closet. I was way to young to understand what it was or how to hook it up to play it. All I knew was that it looked interesting.  Someone at somepoint hooked it up for me because I have a clear memory playing Pong. Yeah.. It was some type of pong clone.  I remember playing it alone, and since the pong game she had was a 2 player only game, I controlled both knobs and playing by myself. Even now when I see pong, its the first memory that pops into my head.

Christmas 1977 was when my father bought the family Atari VCS (2600). Actually it was the Sears Tele-games, which was just a rebadged  Atari VCS for Sears. This was a real Sunnyvale built, silver faced, Heavy Sixer, the real deal. I had one game for it on Christmas day and it was Target-fun and I’m sure it was the bundled game for Christmas of 1977. Here is the page from the Sears Wishbook from 1977 and yup, there is Target-fun. 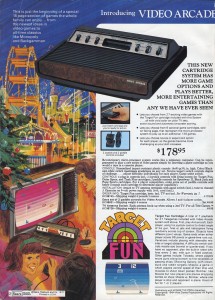 I actually still own my original console, It spent many years in a box in my father’s basement and right now its not actually working. The RF cable had deteriorated, with the outer casing just crumbling away. This is a pretty easy part to replace,and I can have it working in no time, if that is the only issue. I ended up getting bored on Ebay one day and  purchased another 1977 Telegames heavy-sixer that worked. One day I will take some time and try to repair my original .

Looking back, I always saw my father as Dad, the Ageless being that just was. I never saw him as anything other than the guy who took care of me and bought me stuff. I could not comprehend that maybe he liked to play and have hobbies and do things that didn’t involve me. It wasn’t because I was selfish, it was because I was  just a kid. In 1977, my dad was  34 years old, about 8 years younger than I am today.  So it isn’t inconceivable that the Telegames was as much for him as it was for me.  I vaguely remember the rules set forth by my Dad and the user manual regarding how to treat the console . Rules like “Don’t pull the Cartridge out while the game switch was on”. “Don’t be rough on the switches”, “Don’t push the select game too quickly as to damage the switch” were repeated to me on a frequent basis. He basically wanted me to take care of the system.

In trying to remember the games I had, I find my memory is foggy. I remember playing my own Telegames, I also shared games with a friend who also had an Atari VCS. At his home, I remember playing Combat (the game bundled with the Ataris) and Basketball. I also have random memories of much later games Like ET and Pitfall, which I’m sure I owned and other like Raiders of the Lost Ark and Yar’s Revenge that I didn’t. There were also memories of games my uncle and cousins had.  The console was played regularly up until I moved with my mother to California in 1980. I also remember times playing it in 1984 when I went to live with my dad for a year.

Currently I play 2600 games with Emulators. You can literally have every game ever made for it  and every variation of those games  compressed into  a 11 meg zip file. I also have a nice stash of cartridges that I have collected over the years, some from when I was a kid, and a lot from ebay.  When I yank out the console on special occasions, I have a nice stack of games to play. For controllers, I have original paddles, but no original joysticks.  I do have a nice Suncom Slickstick and a Wico Bat that I use instead. The games that I consider my personal favorites are Pitfall, ET, River Raid, Night driver, Yar’s Revenge, and of course Target-fun.  I am not afraid to admit that if it wasn’t for my Dad and the Telegames, this website might have been called the middle aged welder or fisherman or knitter.