So for this Friday’s game, I decided to do one of my all time favorites… Tempest.  As a kid, after a heavy dose of everyday raster games like Dig Dug, Donkey Kong and Galaga, Tempest and other vector games were a breath of fresh air. They were so fluid and different from what I’d been playing before, that I was immediately drawn to them. The differences between raster and  vector graphics can get very technical. I’m going to try and just explain the differences as simply as I can. Standard raster games are made using a grid of tiny dots. for example Galaga, has a resolution of 224 dots wide and 288 dots tall. This means all the things shown on the screen are drawn using this grid. The program builds sprites by filling in dots with colors and drawing this way to fill the screen. Vector games do things differently. All the elements of a game are drawn using 2 points with connecting lines. The software determines the 2 endpoints of a line and the electron guns of the vector monitor  fill in the line between the points. The result is a clean straight line. All the images of the game are composed of these drawn lines rather than by the more blocky pixels of a raster monitor. Here is an example of the differences between raster and vector using the game Gravitar in its original vector form, and the home console conversion in a raster form. 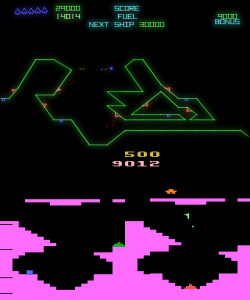 You will never mistake a raster game for a vector game and vice versa. Vector games have a fluid feel to their gameplay. This is because the drawing of the Vector lines isn’t connected to the refresh rate of the CRT tube and this allows things to be drawn much more quickly. The refreshing of the screen isn’t speed limited like a raster game. This is a byproduct of not using the grid and pixel type of technology. The disadvantage of vector games comes from the fact that the outlined areas are not filled in. This contributes to a much more sparse looking game. I love the way vector games look personally, The contrast between the lines and the blackness of the screen give all vector games a dark, complex feel. Ok enough about the tech, lets talk about Tempest!!

Tempest was released in 1981 and is a vector game that uses 2 buttons and a Spinner controller. Here is the Arcade Museum’s Description of the game from their site, ” You control a yellow crab-shaped shooter that travels along the outside rim of a 3-dimensional tunnel, shooting enemies down the alleys of the tunnel while avoiding any coming down the alleys. The tunnel takes on 16 different forms, and the shooter has a special “superzapper” that enables it to kill all enemies present in the tunnel.” simple and accurate. The game lets you start from the beginning or from upper levels, where you get a bonus for starting on a higher difficulty. 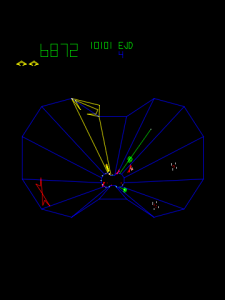 The first time you play the game, the spinner will feel very unfamiliar. It wasn’t a common control type and didn’t play anything like a joystick. The games commonly associated with knob controllers were Pong and the Breakout series. Their spinners were used to move a paddle, either along the bottom or along the edge of the screen, to interact with a ball type sprite. The Tempest controller worked perfectly for its unique gameplay. Being able to swing 360 degrees, around the edge of closed playfield, and to go from one end to the other in an open ended play field level, would have been difficult with a joystick.

As you move up the levels, you are introduced to different types of enemies. They travel up from the bottom of the 3d shape and make their way towards you. In the beginning, you start off going against the red, bow tie shaped Flippers. The Green, squarish Flipper Tankers get added to the mix after level 3. When the Flipper Tanker is shot, it splits into 2 Flippers. Next up is the green, swirl shaped Spiker at level 4. As the Spiker comes up an alley from the bottom, they draw a green spike behind them. After you finish the level, and you fly down the tunnel to the next level, you must either go down a clear alley or shoot the spike clear.
To keep things interesting, the game designers keeps throwing new enemies at you as you progress. At level 11 you get the multicolored, sparkly, five pointed, fuseballs. They move slowly, but change alleys frequently, and aggressively come after you. Guess what? They get a tanker too, at level 33. Shoot the Fuseball Tanker and you have 2 fuse balls inside. The last 2 enemies are the Pulsars and Pulsar tanks. The light blue, zigzag shaped Pulsars show up at level 17. They are the only enemy that directly effect the environment. The pulsars can short circuit alleys, and if the alley is shorted, you can’t cross over it. If you are in the alley when it gets shorted, you die. Finally, if you make it all the way to level 41, you get the last baddie, the Pulsar Tank. It acts like every other Tank. Upon shooting it.. out pops 2 Pulsars.

This is one of the games from my childhood that I remember fondly, even after all these years. I remember playing it at the local bowling alley, the Chuck E. Cheese, and at the Shakey’s pizza parlor.When you first start playing, you usually start off spinning the crap out of the dial and firing indiscriminately. This was called the spraying and praying technique. After you got comfortable with the dial, and your need for living longer than a few levels, you started finger tipping the spinner in a more surgical manner. This got you a lot further into the game.

I was inspired by my love of Tempest to make my first MAME machine a little different from other cabinets. Instead of throwing a thousand controls and a million buttons on my control panel, my cabinet had, a pistol gripped 2 button 8 way stick, a 2 1/4 inch trackball with 3 game buttons, and finally a spinner. 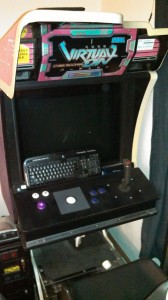 This Mame cab was made to play 3 games, Tron, Centipede and Tempest. Tempest is the kind of game I went the extra mile to play. If you get a chance to play tempest or one of its sequels, jump at it and see how awesome and fun this game can be.