Ok, Im gonna make a ton of excuses for why I haven’t posted in two weeks. Lets see, I blame the holidays, I caught a cold, oh and work got really busy.  So there was just no way for me to write a Friday article. Now thats out of the way, I’m gonna review the Bally Midway game, Timber. 🙂

I remember playing Timber and,  what I consider its cousin, Tapper at the College arcade in Hollywood California. The Arcade was across the street from Los Angeles City College. That place was the Quintessential 80’s arcade, Dark tinted windows, with the whole place bathed in either black light or a Blue glow with a ton of Neon on the walls.  About 200 feet up the street, was a second competing arcade, the Family Arcade. It was little more brightly lit with a ton of games packed into a slightly smaller space. In 1984, I was 12 years old and only got to go to the arcade when I could talk my older cousin into going. Since she was 18, this wasn’t hard because all of her friends practically lived there. I remember walking in and seeing Timber  for the first time and noticing that the guy chopping tree’s looked like the guy who was serving beer (or soda) in the Game Tapper (or Root beer Tapper). Instead of wrangling drinks for patrons, The “Tapper guy” was now being paid to chop down Trees. 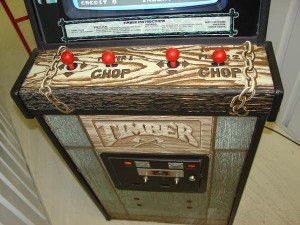 The game Timber is a 1 or simultaneous 2 player  game. It had a unique control setup.Each player had a 4 way Joystick with a  second 2 way left-right joystick. The 4 way was used to move the Lumberjack around the screen and the left right joystick directed which way he would chop. In the game you work for the “Boss”, at the beginning of each level he gives you a quota of trees that need to be chopped down and a time limit to complete it by. All you do is wander around and chop down trees that pop up on the play field. A new tree pops up (or multiples in later levels)after you chop one down.  As you are chopping you can also lean on the tree to make it fall away from you, adding a bit of strategy to the laying of the trees. On the first level, all you do is race the clock, chop down trees and avoid having the trees fall on you. At the end, The boss congratulates you on a good job and pays you a bonus based on the amount of time left on the timer. The next level introduces you to more of the game play including the Angry Bear. 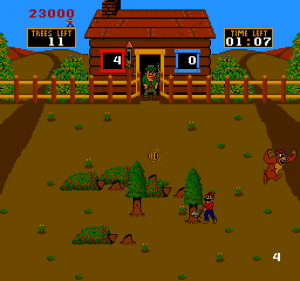 This Bear seems to have an issue with you chopping down trees and he shows up along the edge of the play field. He doesn’t attack you directly, Instead he throws a beehive at you. If it hits you, the bees strip you down to your boxers and you lose a life. You aren’t completely helpless though, If you are in the right position and your timing is good, you can knock down the thrown hive with a swing of your ax and earn 500 points.   The other thing added to level 2 is another bonus hidden in some of the trees. Inside the tops of some of the trees is a bird, that looks like a featherless turkey. Upon chopping his tree down, the bird starts to run around the screen. If you “catch him” by touching him, you can earn a bonus of 1000 points. 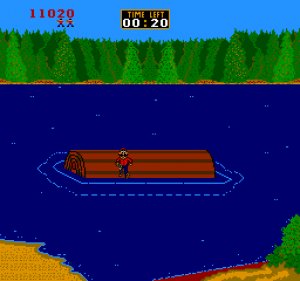 After Level 2 you get to the “Bonus Stage”. Your little Lumberjack is placed on a rotating log that changes direction. Your goal is to stay on the log by running in the opposite direction the log is rolling If you survive for 20 seconds you can earn a bonus of 1000 points.  In later bonus stages the diameter of the log gets smaller and smaller, increasing the difficulty. This goes from hard to insanely hard, I think I finished the bonus on level one once. This is the one level where you can’t lose a life.

The game pretty much repeats after the first few levels. The only changes is an ever increasing quota and time limit.  Just having a large amount of fallen trees on the screen, makes it difficult to move around. You have to make you way to the unchopped trees through the fallen trees left behind. This is where the leaning comes into play. You can push trees over into groups to leave walk ways up and down the screen. Its all part of the strategy element that keeps the repetitive nature of Timber from getting boring.

The 2 player game is similar to the one player game but  you end up trying to chop more trees than player 2 and you can also push trees on top of other players to stun them. This brings a new dimension to the game play.

I’ve been playing Timber in MAME the last week or so. Its the type of game that lets you jump in and play a few games quickly.  My cab has only one joystick  and 8 buttons, so I ended up mapping the left and right chopping action to two side by side buttons and bam, I was chopping trees like there was no tomorrow.  The graphics are bright and colorful. All of the character sprites are pretty large and detailed, so everything is easy to make out. The lumberjack looks like a lumberjack, and the bear looks like a bear. 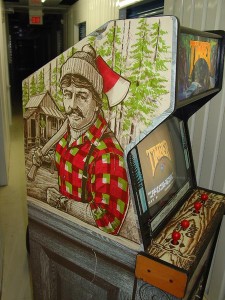 I learned while reading up on the game that Timber never had its own cabinet. They were all converted Tapper or Root Beer Tapper cabinets. The side art consisted of a side sticker that covered the old Tapper logo on the side, leaving the faux wood sticker on the lower part, untouched, and a front sticker that covered the word tapper on the front of the control panel.  Timber has a nice balance of action and strategy for a 1983 game. Easy enough for a little kid to play, but with enough challenge for grownups. The MAME Emulation seems pretty flawless and is totally worth a try.