OK, this week I reached way back into memories from my childhood, and found this bad boy, Moon Patrol. In 1982,  I swear I ran into this game everywhere. Liquor stores, arcades, pizza shops, Laundromats, you name it. About half were genuine cabinets,  but in Southern California, in the 80’s, Bootleg cabinets were everywhere.  Moon Patrol was always the second or 3rd cabinet in a place. It seemed like it was Crazy/Donkey Kong and Moon Patrol, or Pac-man and Moon Patrol. A great companion cab to a business’s primary money maker.  I think the gameplay and the generous continue system contributed to it popularity. 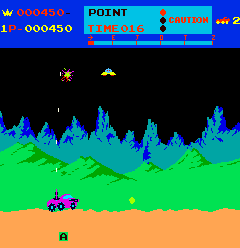 The backstory of this game has you playing as a Luna City Police officer in control of a moon buggy.. well that all you need to know. The goal of the game is to patrol 26 checkpoints, denoted by  letters in the ground (a-z), using your moon buggy. The Checkpoints are grouped into 5 areas with new areas starting at E,J,O,T, and then ending at Z.   Your buggy fires forward and vertically at the same time, when you press the fire button. The joystick is a 2 way control, used to manage the speed of the buggy. Push it left, it slows down and moves toward the left side of the screen. Push it right and the speed increases. It also moves more toward the center of the screen. 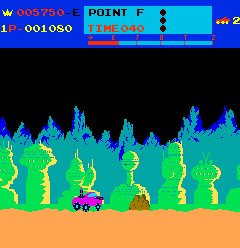 The game starts you off on the “beginners” course. As you drive along you have obstacles in front of you and enemies flying above. The obstacles include, small and large craters you have to jump over. There are also stationary rocks of different sizes, that can be jumped if small, or shot if they are large. In later stages, you run into varying sized boulders coming down a hill at you. Finally there are land mines, a blinky sprite that can’t be touched, and must be jumped, or you blow up. 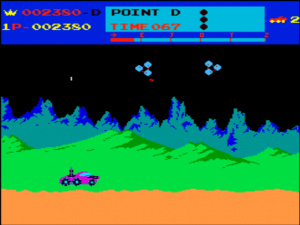 For enemies, you have different forms of UFOs. There are disk shaped ones that look a bit like Mentos, but bright yellow. There is also the “Traditional” hubcap shaped ufo, Gray and yellow with red details. These both attack you by flying over head and dropping bombs on you. I always thought it was great that I could shoot the ships AND the bombs. The bombs are smaller and harder to hit, but it is possible to shoot them down with a little practice. The Final UFO is triangle shaped, with blue balls at each corner. They showed up on occasion and throw a different kind of bomb in front of you. These bombs caused craters when they hit the ground, so be ready to jump if you missed shooting them down.

In the last set of Checkpoints you meet the mini tanks. They show up in front of you firing, either while moving toward you or stationary. You can shoot the tank’s shots just like you could with the UFOs. Wow I almost forgot. There is a tiny little ship, which always reminds me of the Land speeder from Star Wars. So this ship shows up and starts following behind you at Letter A of the Champion Course. Just before letter B,  The little ship speeds up and tries to ram you from behind. You have to jump and have him pass under you, at which point you can shoot the bastard.

The Game’s graphics are modestly detailed with large, for the time, game sprites. It had one big stand out graphically, the first parallax scrolling background.  Their were 2 rows of backgrounds that moved at a different speeds to the foreground action, and this added to the gaming experience. As a kid, I wasn’t aware about of the importance of parallax scrolling, I just knew it made the game look cooler. Moon Patrol had a great  continuation feature.  When I put a quarter in, it restarted where I left off, not at the beginning of the stage. I can honestly say this had me pumping a lot more quarters or tokens in just because I didn’t lose my place by having to restart a section when I died.

Speaking of the end, Once you get to Letter Z you go back to the Moon base to start the “Champion” Course. This level Goes A to Z like the first course, and ends up endlessly repeating after you finish it. The Champions course uses all the elements from the beginners course. The difficulty ramps up quickly. and you will be dumping credits into this machine just to trying to get past certain checkpoints. 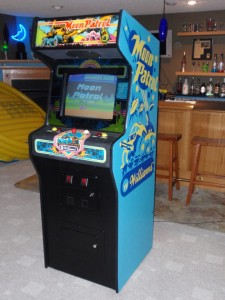 One of my clearest memories of Moon Patrol happened around 1987 or 1988 at an arcade near the campus of USC. My friend Doug and I had just finished a few games of Silkworm. (OMG the Cooperative mode is fantastic btw.) I spotted Moon Patrol a few cabinets down the row and decided to play it. Compared to the loud frenetic play of the newer games in the arcade, it was like playing an old friend. The game was familiar and just challenging enough to keep me feeding quarters into it. For this review, I pulled up Moon Patrol on https://archive.org/details/internetarcade to play a few games. Guess what? Its still fun. So If you have a MAME setup, or just want to rough it by using a keyboard like I did, give this game a little attention. Its a classic for a reason.